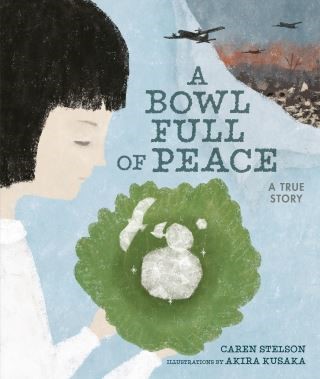 A Bowl Full of Peace

A heartbreaking but essential perspective on war and survival.—starred, Kirkus Reviews

In this deeply moving nonfiction picture book, award-winning author Caren Stelson brings Sachiko Yasui's story of surviving the atomic bombing of Nagasaki and her message of peace to a young audience.

Sachiko's family home was about half a mile from where the atomic bomb fell on August 9, 1945. Her family experienced devastating loss. When they returned to the rubble where their home once stood, her father miraculously found their serving bowl fully intact. This delicate, green, leaf-shaped bowl—which once held their daily meals—now holds memories of the past and serves as a vessel of hope, peace, and new traditions for Sachiko and the surviving members of her family.

When author Caren Stelson first heard Sachiko Yasui speak, she knew she needed to share her story with young people. She eventually made five trips to Japan to interview Sachiko in Nagasaki and conduct additional research. Caren's book for middle grade readers, Sachiko: A Nagasaki Atomic Bomb Survivor's Story, was longlisted for a National Book Award and received a Sibert Honor Award, the Jane Addams Children's Book Award, and the Flora Stieglitz Straus Award. Caren and her husband Kim live in Minneapolis. They have two adult children and one grandson, Reid, who, like the readers of A Bowl Full of Peace, will be our next generation of peacemakers. www.carenstelson.com

Akira Kusaka is an illustrator and graphic designer who has created advertisements, book covers, children's books, and more. He has not experienced war, and illustrating Sachiko’s story for A Bowl Full of Peace prompted him to contemplate both war and peace. He hopes that this book will inspire the next generation of children to think deeply about peace as well. When Akira is not drawing, he plays trombone in a two-man band called Repair. He lives in Osaka, Japan. See more of his art at: akirakusaka.com.